Heartland Foundation has traveled the path of beginning as a traditional hospital foundation managing charitable funds and healthcare-related projects to establishing ourselves as one of the only hospital-based foundations in the United States committing 100% of our annual program operations to addressing the root causes of our region’s challenges.

Here are the major milestones along the way . . .

1982 – Methodist Medical Center Foundation is established as a 501(c)(3) public charity to support opportunities for excellence in hospital care.

1987 – First major fundraiser generated over $750,000 for an endowment that funds programs to assist families facing cancer.

1993 – A new partnership is formed with Missouri’s Cattlemen Foundation to help Missouri families purchase medical adaptive equipment for their children.

1997 – Heartland Health Foundation changes its name to Heartland Regional Community Foundation. The Board broadens the mission “to continuously improve the health and quality of life for children and adults within the region.”

1999 – First region-wide youth survey is conducted to find out what 4,400 youth had to say about their interest in community decision making and other issues that affect their lives.

1999 – The first Regional Planning Forum is held at Conception Abbey in collaboration with the St. Joseph Area Chamber of Commerce, Northwest Missouri Resource Team, and Northwest Missouri State University, with more than 100 economic developers and community leaders from throughout the region in attendance.

2000 – Foundation kicks off its Campaign for Community Change and Innovation, a $10 million campaign to fund healthy community initiatives and an operations endowment. The campaign raised nearly $9.9 million in 2005, with more than $9.4 million in charitable gifts and a $450,000 USDA loan. A new fundraising goal was set at $11 million.

2001 – The Learning Exchange, a national educational consulting firm, conducts a feasibility study for a one-of-a-kind experiential learning center for students ages 12-15.  The Learning Exchange continued to work with the Foundation and in 2004, along with local and national volunteers, began to create a curriculum for youth to bring education, public participation, citizenship, and democracy together in our quest to build healthier communities. The project, originally called emPower Plant, is now emPowerU.

2004 – The Board of Trustees changes the organization’s legal name to Heartland Foundation. Our vision became “healthier, more livable communities,” and our mission became “to empower children and adults to improve their health and quality of life.”

2006 – Renovation and construction of emPowerU begins. The project will become a technology-rich facility that will house a myriad of Foundation-sponsored programs and community meeting spaces.

2007 – emPowerU opens on August 27. Hundreds of supporters attend the celebration held during the Foundation’s 25th year of operation.

2009 – Together with Heartland Health, the Foundation accepts the 2009 Foster G. McGaw Prize for Excellence in Community Service. Four of the five programs honored were Heartland Foundation sponsored programs.  The same year, the organizations received the Malcolm Baldrige National Quality Award for excellence in organizational performance.

2017 – Heartland Foundation celebrates 10 years at our emPowerU Campus. A special thank you to the many investors and partners who believed in our vision to create a place to fuel innovation, collaboration, and education.

“They say seeing is believing, but the opposite is true. Believing is seeing.” – Errol Morris

Heartland Foundation has served more than 22,000 students through emPowerU since 2007. 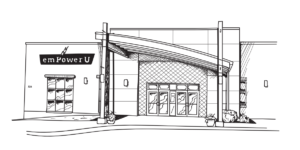 Learn more about the history of Heartland Foundation in our book.

This book is a comprehensive, inspiring review of how Heartland Foundation came to be and best practices garnered from experiences on the journey that can be applied anywhere people live in the world.